​To ensure a central government in which no individual or group gains undue control, the Constitution of the United States divides the federal government into three branches.  This presentation describes the powers of and the interrelationship between the Legislative, Executive and Judicial branches.

THE FIGHT FOR WOMEN'S SUFFRAGE
​On August 18, 1920, American women won the right to vote after a struggle that dates to the launch of the Woman's Movement in 1848.  During those 72 years, untold numbers of women marched, wrote letters, made speeches, and picketed the White House.  These activities drew scorn and ridicule, and for some, imprisonment under inhumane conditions.  Make no mistake:  gaining suffrage for women was a fight.

The LWV was founded by one of the leaders of this battle: Carrie Chapman Catt.  Therefore, we are particularly proud to bring you this story of sacrifice, courage, and determination as we celebrate the 100th anniversary of the ratification of the 19th Amendment. 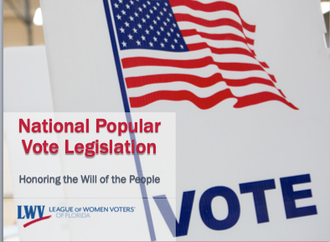 ​This presentation explains the origin and function of the Electoral College in the election of the President and Vice President of the United States.  It then examines the changes some states are making to their delegate selection process to better reflect the popular vote. 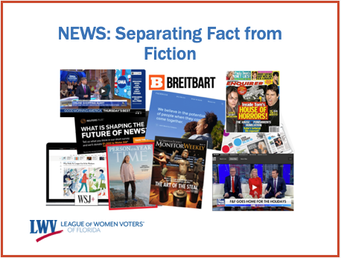 If you feel overwhelmed by the number of news sources available . . . if you hear conflicting reports and don't know which to believe . . . if you can no longer believe your eyes because you know digital technology can alter photographs, this presentation will help you learn to separate fact from fiction.